John Eastman, the author of an infamous legal memo that outlined how Donald Trump could claim victory despite losing the 2020 presidential election, said Monday that his phone was seized by federal agents.

Eastman claimed that officers ‘forced’ him to unlock his iPhone 12 Pro and accessed his email accounts, in a court filing first reported by CNN.

Half a dozen agents reportedly confronted the right-wing attorney in New Mexico as he was leaving a restaurant with his wife and another person on Wednesday evening last week.

The filing also suggests authorities had a warrant to take Eastman’s electronic devices.

Eastman ‘was forced to provide biometric data to open said phone’ and ‘was not provided a copy of the warrant until after his phone was seized, and even then, he was only given a copy of the search warrant but not the supporting affidavit referenced in it,’ it states.

He’s now demanding that a New Mexico court force the federal government to return his property, in addition to destroying the records it obtained and barring further access.

It’s the newest in a series of high-profile moves by the Department of Justice (DOJ) to crack down on those who allegedly took part in efforts to overturn President Joe Biden’s victory.

The DOJ has subpoenaed at least nine people across multiple states who were accused of helping Trump’s alleged ‘fake electors’ scheme to alter Electoral College votes in his favor. 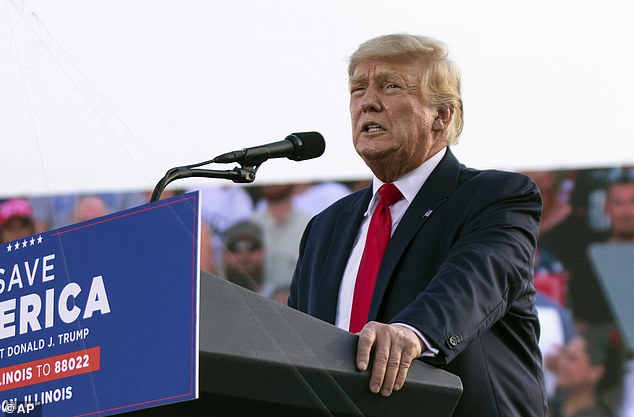 Federal agents reportedly executed Eastman’s search warrant on the same day the government raided the home of Jeffrey Clark, a former DOJ environmental attorney who aided the ex-president’s attempt to weaponize the department in his quest to stay in power.

Trump’s attempt to install Clark as the acting Attorney General was met with the threat of ‘hundreds’ of resignations across the administration, former officials have claimed.

Eastman appeared on stage next to former Trump lawyer Rudy Giuliani on January 6, 2021 at the former president’s ‘Stop The Steal’ rally that immediately preceded the Capitol riot.

He allegedly presented the plan to Trump himself in the Oval Office.

Pence rebuffed pressure from Eastman and Trump to execute the plan, fueling fury in the former president’s supporters – some of whom chanted ‘Hang Mike Pence’ in the halls of the Capitol on January 6.

He ultimately presided over the Joint Session of Congress that certified Biden’s victory.

Eastman’s legal dispute with the DOJ comes amid a months-long court battle with the House select committee investigating the January 6 attack on the US Capitol.

A judge who ordered Eastman to turn over hundreds of emails to the January 6 committee said earlier this year that he and Trump likely committed crimes.

‘Based on the evidence the court finds that it is more likely than not that President Trump and Dr Eastman dishonestly conspired to obstruct the joint session of Congress on January 6 2021,’ US District Judge David Carter wrote in March.

He dubbed Eastman’s plan ‘a coup in search of a legal theory.’

At least 46 migrants found dead inside tractor-trailer in Texas: reports