Photos shared on social media show the wall is disrepair after storms knocked the floodgates off their hinges.

Since it’s erection, the barrier lining the US-Mexico, which Trump has previously described as being ‘virtually impenetrable,’ has struggled to withstand the power of wind, rain and manmade power tools.

The damage that took place near San Bernardino was the result of downpour of rain, totaling about 2.15 inches, that funneled washes and flooding across the region.

A photograph shared by an Arizona-based environmentalist Kate Scott shows the portion of wall, located in in Silver Creek, about 17 miles northeast of Douglas, Arizona, with floodgates open and lined with debris including large trees.

The barrier did not withstand the ‘several feet of rising water’ that traveled through the area last week, according to Border Report.

The National Weather Service recorded 2.5 inches of rain in the area on Aug. 17.

A Customs and Border Protection spokesperson confirmed to the Associated Press on Monday that the floodgates had been opened in wake of the rainfall, which is said to be ‘far above normal’ amounts.

The gates are intended to prevent the build-up of boulders, branches and other debris during heavy rains. CBP says it is typical for the gates to be opened when major rainfall is predicted. 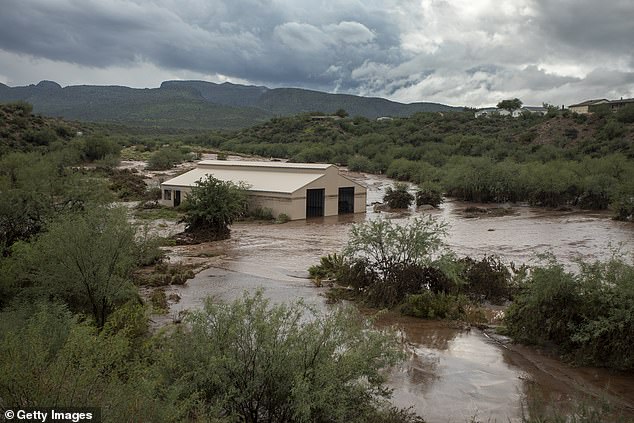 The National Weather Service recorded 2.5 in. of rain in Arizona’s borderlands area on Aug. 17 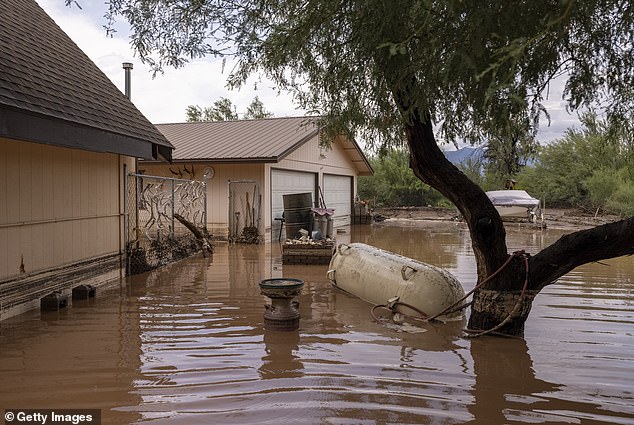 Homes in the borderlands region were hit by a flash flood from a monsoon rainstorm, which was made worse by the quick runoff from the denuded landscape of the burn scar of a major wildfire upslope

The government agency is currently assessing the damage along the wall and plans to repair it in the future.

Trump, who focused heavily on the border wall during his presidential campaign, built just three miles of primary wall on the U.S.-Mexico border where no barrier existed while in office.

While 194 miles of wall had been built by May 2020, the vast majority of ‘new’ wall was replacing old wall. Only 16 miles of the 194 represented construction in places a wall didn’t exist, and of that tally, 13 miles were new secondary wall, while three were primary.

Now, as the wall faces flood damage, critics argue Arizona’s weather was not extreme but, instead, the wall was poorly built.

‘For years, we have been warning and predicting that exactly this would happen and while this was a significant rainfall, it wasn’t atypical. We always have heavy rains in the monsoon season,’ Jordahl told Border Report.

‘This was a highly predictable occurrence. The construction of this wall was so ill-advised and ill-conceived and rushed and inflicted a huge amount of damage for a wall that washed away in its first summer.’

Scott Nichol, self-proclaimed artist, educator and ‘hater of border walls,’ echoed Jordahl’s assertion, saying that for over a decade the same style of barrier has been washed away by weather events. 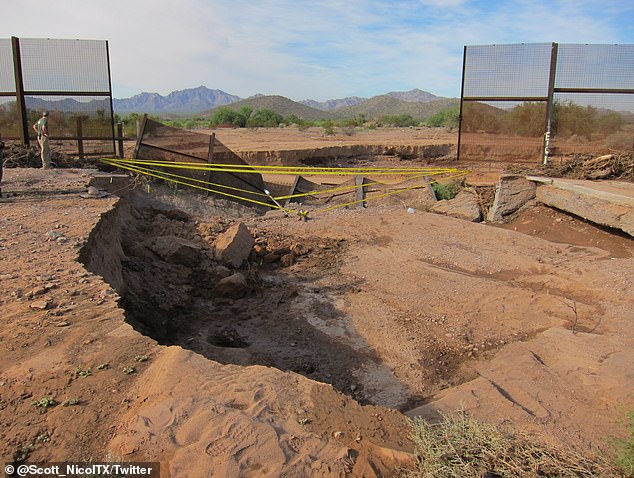 He shared of photo of a portion of a border wall near Arizona’s Organ Pipe Cactus National Monument that was allegedly ‘swept away’ by flooding in 2011.

‘Border walls have been washing away regularly for over a decade,’ he tweeted. ‘The same contractor that built was awarded the wall contract through San Bernardino.’

‘Border wall masterminds were never serious about it being a practical deterrent. It has always been a symbol of xenophobia, white supremacy and fear of being “replaced”. May these ugly ideas deteriorate into oblivion asap, just like this wall is deteriorating from elements,’ wrote @mamabea67607755.

‘Just asking…but is there any quality control….or any corruption control in the spending of tax payers money….I mean any? At all?’ questioned @getamop.

‘The border wall was a way for preferred contractors to make money hand over fist. I still do not understand why this travesty is not being investigated,’ argued @ItsLisaRice. 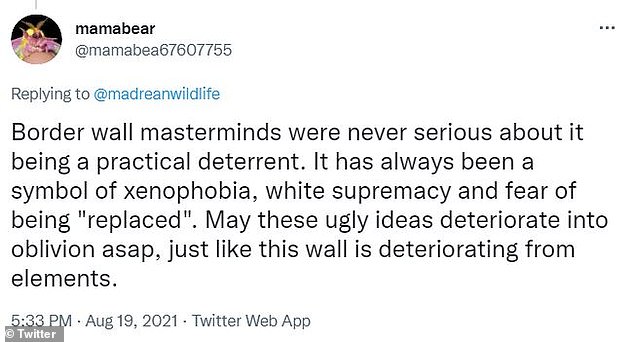 Last year, a portion of the border wall got blown over by high winds, reaching speeds of 37mph, causing it to fall onto the Mexican side of the border.

The portion of the wall that fell ran roughly 130ft in length and, at the time, was part of an ongoing project to improve existing sections of the wall.

CBP shared that the section that fell had been set in a new concrete foundation which had not yet been cured, thus making it that so the panels were unable to withstand the harsh winds.

In 2019, the barrier was breached by smuggling gangs from Mexico who sawed through the wall using every day power tools, including a popular cordless reciprocating saw that could be purchased for less than $100.

The security breaches were then used to open gaps large enough for people and drug loads to filter through.

After the breach, CBP allegedly beefed up security at in San Diego and El Centro, areas of California that were prone to smuggling. 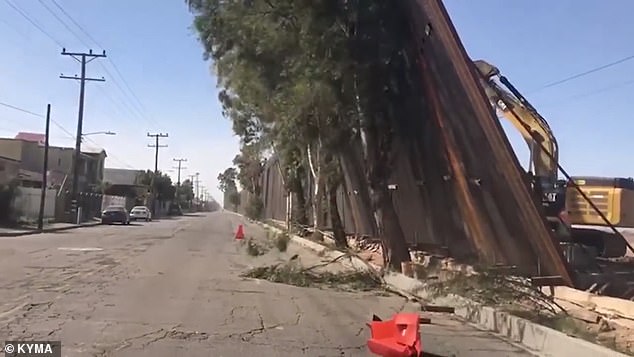 The portion of the wall that fell in Mexicali, Mexico in January 2020 ran roughly 130ft in length 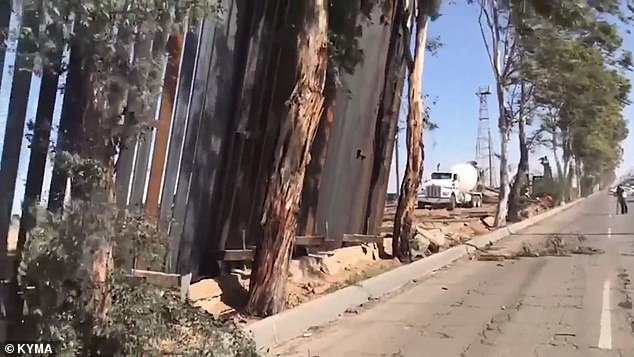 Carlos Pitones, an agent with the Customs and Border Protection sector in El Centro, California, shared that the section that fell had been set in a new concrete foundation in Calexico, California. The concrete had not been cured

What is RPC? Here's what to know about Russia and the Paralympics 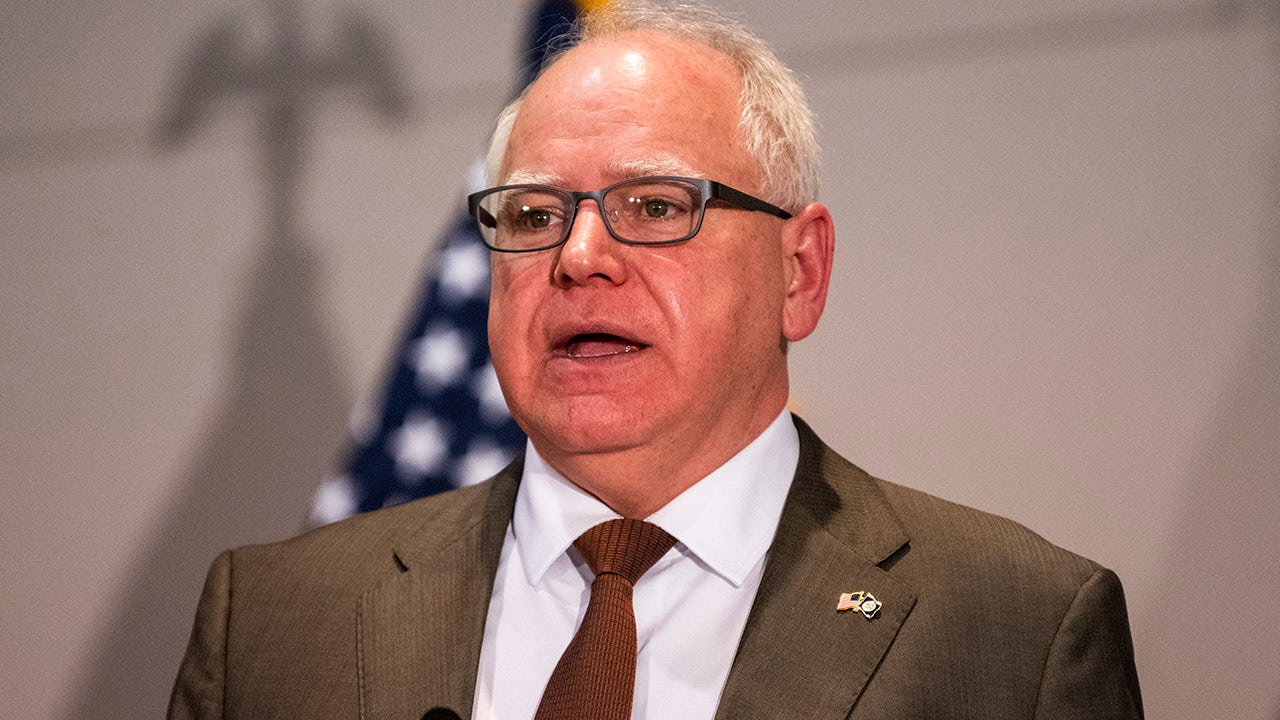